I first began the whole foods program in February of 2012 at the age of 43. I had gained some weight and was miserable. I was having severe issues with uterine fibroid tumors, with heavy periods lasting 2 to 3 weeks, which in turn resulted in fairly severe anemia. I was lethargic and weak. I had acne. A cyst had even developed on my face, which I had removed by a dermatologist. I weighed 160 pounds. A retired doctor friend of mine recommended that I look into what Dr. McDougall teaches. I was eating vegan for animal rights reasons, but I was mostly eating high fat processed foods. My greatest weakness was dark chocolate with peanut butter; I could make meals out of it.

From February to June, I mostly ate the McDougall diet and had lost 14 pounds by the time I entered Dr. McDougall’s 10-day live-in program in June of 2012. It was sometime after attending that I discovered that Julie had been learning from another plant-based physician in the same category as Dr. McDougall, that is, Dr. Esselstyn. Julie and I shared notes, and soon after I noticed that Julie’s Protective Diet program was taking off. I could tell from the start that Julie was going places with Protective Diet. I was excited for her. I joined PD and got to watch this thing from its infancy to the amazing program it is today.

Though I would eat low-fat almost all of the time, I would occasionally cheat with some high fat vegan food, especially at vegan gatherings. I also had some vegan candy that I purchased for my first grade class that I would get into when I felt stressed. I can honestly say, though, I was mostly over my addiction to the high-fat foods because unlike my hundreds of other diet attempts, I never went crazy and gained my weight back. Instead, I just thought that I “deserved” to eat high-fat every now and then, and I believed that it wouldn’t hurt me.

But in 2015 I learned differently. Because I so rarely ate anything off-plan, I noticed a pattern. When I rarely did, I would get horrible stomachaches. On a few occasions after treating myself to high fat vegan desserts I ended up with severe constipation to the point of vomiting. The pain was excruciating, like nothing I’d ever felt. Indeed, it was so severe that I ended up in the emergency room 3 times in 2015. What had happened each time is that my fibroids had become inflamed and caused the constipation.

So in November of 2015 I committed to eating a no oil vegan diet 100% of the time. While Dr. McDougall lit the fire, Protective Diet helped me get and stay on the straight and narrow. I have responded well to Julie’s no-nonsense approach. Maybe it was tragically losing her best friend to heart disease, but Julie fully understands what’s at stake.

I should mention that I love Julie’s recipes, and this non-cook has benefited greatly from her accompanying videos. Julie’s recipes are amazing! They make this journey tasty and fun. Among my favorites are her potato and kale soup, the creamy ranch dressing, the blueberry muffins, the mushroom gravy, the banana bread, the cheese sauce, the breaded mushrooms, the pita pockets and the brownies.

This morning I weighed 135, which is what I usually weigh these days. I’ve kept 25 pounds off without any real effort on my part. I eat what I want. I don’t exercise a lot. I probably lift weights on average once a week. (I signed up for twice a week, but my schedule is so hectic that it’s rare that I can maintain that.) While I plan to add more exercise to my routine, it’s a relief that I don’t have to rely on exercise to keep my weight down.

Whereas at 160 I was wearing sizes 11-12, now I comfortably wear sizes 7-8, and have several generous size 6’s in my closet. I even have a couple of pants that are size 5. Incidentally, I love to shop for clothes at resale shops these days. This is the first time in my adult life that I can wear these sizes. Indeed, I weigh less today at the age of 48 than I did when I was 18.

I’d like to say that my fibroids are gone. Unfortunately, they are still with me. I have 5 of them. As I have gotten smaller, they are getting smaller. My largest tumor was 6.5 centimeters last December, and was 4 centimeters in June — a result of my 100% commitment this past year, no doubt. Though my symptoms have improved substantially, I need to shrink them even more. I am determined to not go through any additional surgery. I had a fibroid removed years ago, when I was still eating animals. It was believed to have caused a miscarriage. Not knowing that changing my diet might help, I had a myomectomy (surgery to remove the fibroid). The surgery didn’t help. It created scar tissue and kept me from being able to have children. More tumors grew in its place. Most doctors recommend that patients like me have a hysterectomy. Indeed, problems with fibroid tumors are the number one reason that women have hysterectomies. Dr. McDougall tells me that my fibroids should become a non-issue if I lose an additional 15 pounds. That is my next goal. I am learning from Julie’s 21 Meals to Mastery program and Dr. McDougall’s Maximum Weight Loss program.

Recently I posted a video on YouTube that celebrates both the Protective Diet and the McDougall diet. It’s my thank you to both Julie Marie and Dr. McDougall.

Incidentally, I know my weight loss isn’t too dramatic, but to me, it’s a miracle that I can weigh 135 without being hungry all the time. Indeed, that’s my favorite thing about eating this way: no hunger necessary! Incidentally, I don’t have any photos of me at 160, as I tossed any pictures from me at that time, not knowing that I’d someday want one of them! So I weighed a little over 150 in my “before” photo. And, sorry that I’m not smiling in my “after” photo! I’ll try to get a better picture in the near future.

The Protective Diet plan is so wonderful. Between the live class, the website and the interactive group on Face book, it’s like 24/7 support. Even though it can be a little hard in the beginning giving up foods you are used to or always felt were healthy it doesn’t take long to become a believer… Read more or comment “Lori R”

It’s all a matter of perspective 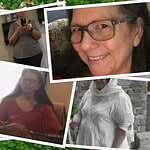 Lately I have really been wanting to move my body more than just walking the dogs. I started thinking about returning to Curves. Nine years ago I had joined Curves and for about five months was able to go and exercise. When I went in for my first consultation I was given a BMI calculator… Read more or comment “It’s all a matter of perspective” 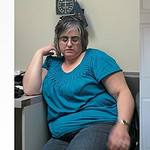 Three years have passed since I made the decision to start Protective Diet. I have overcome several health concerns and achieved many goals. I have grown and learned so much over these years. I enjoy helping others achieve their goals, sharing my experiences and teaching them about PD and how this way of life can… Read more or comment “Three Years and Counting!” 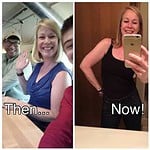 March 1, 2015, about 9 am. That moment is sealed in my memory. I ran into my esteemed co-worker Robinlee Garber in the hallway for the first time in months. My jaw dropped. I couldn’t believe how she looked! It wasn’t just that she clearly lost a significant amount of weight, but her skin glowed… Read more or comment “Joanne”

Julie, I have to take a moment to thank you. I currently have your spinach lasagna in the oven baking and I am looking forward to dinner tonight! I changed the way I have been eating a few months ago but I have yet to actually cook an actual recipe. I have never eaten tofu… Read more or comment “Shannon O.”

You Are Never Too Old To Change Your Life With PD 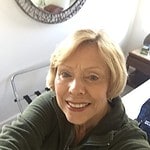 In May of 2015 upon returning from a 3 week vacation, I found that my blood pressure (been high and on meds since I was 50) had reached 220/110 at my Dr’s office. I also had a cholesterol reading of 235. I was in crisis; a heart attack or stroke waiting to happen. After several… Read more or comment “You Are Never Too Old To Change Your Life With PD”

I was skeptical… at first!

I have to admit when my mother suggested this idea of no meats, dairy, oils, etc. I was highly skeptical. Those are all the things I love about food! Then we made some of the recipes, starting with sauces like the sweet mustard dressing, ketchup, etc. I loved them. We then moved on to snacks… Read more or comment “I was skeptical… at first!”